This document includes relevant flood map terminology that can help you familiarize yourself with the common flood mapping terms and designations you may see on your InterFlood maps.

A 100‑year flood is a flood that has a 1-percent chance of being equaled or exceeded in any given year. A base flood may also be referred to as a 100‑year storm and the area inundated during the base flood is sometimes called the 100‑year floodplain.

The term "100‑year flood" is misleading. It is not the flood that will occur once every 100 years. Rather, it is the flood elevation that has a 1- percent chance of being equaled or exceeded each year. Thus, the 100‑year flood could occur more than once in a relatively short period of time. The 100‑year flood, which is the standard used by most Federal and state agencies, is used by the National Flood Insurance Program (NFIP) as the standard for floodplain management and to determine the need for flood insurance. A structure located within a special flood hazard area shown on an NFIP map has a 26 percent chance of suffering flood damage during the term of a 30-year mortgage.

What is a Base Flood Elevation?

What is a Special Flood Hazard Area?

In support of the National Flood Insurance Program (NFIP), FEMA has undertaken a massive effort of flood hazard identification and mapping to produce Flood Hazard Boundary Maps, Flood Insurance Rate Maps, and Flood Boundary and Floodway Maps. Several areas of flood hazards are commonly identified on these maps. One of these areas is the Special Flood Hazard Area (SFHA), which is defined as an area of land that would be inundated by a flood having a 1-percent chance of occurring in any given year (also referred to as the base flood or 100‑year flood). The 1-percent-annual-chance standard was chosen after considering various alternatives. The standard constitutes a reasonable compromise between the need for building restrictions to minimize potential loss of life and property and the economic benefits to be derived from floodplain development. Development may take place within the SFHA, provided that development complies with local floodplain management ordinances, which must meet the minimum Federal requirements. Flood insurance is required for insurable structures within the SFHA to protect Federal financial investments and assistance used for acquisition and/or construction purposes within communities participating in the NFIP.

What is a LOMA, LOMR, or LOMC?

A LOMC (Letter of Map Change) and LOMR (Letter of Map Revision) can be submitted by anyone, but to verify its accuracy, LOMCs have a long review time by FEMA. A LOMA (Letter of Map Amendment) is only to be submitted by licensed professional surveyors and engineers, which drastically shortens the review time by FEMA. FEMA occasionally reviews and releases new and updated maps, as well as some changes to flood zones based on those LOMA and LOMCs. However, they typically do not issue determinations on single properties.

What are the Different Flood Zone Designations & What Do They Mean?

We do include a description of each in the section below, but for the most up to date information directly from FEMA's website, visit their glossary of flood zones: https://www.fema.gov/about/glossary/z

What is a "Floodway"? What Does It Mean if my Property is in the Floodway?

Rivers and streams where FEMA has prepared detailed engineering studies may also have designated floodways. For most waterways, the floodway is where the water is likely to be deepest and fastest. It is the area of the floodplain that should be reserved (kept free of obstructions) to allow floodwaters to move downstream. Placing fill or buildings in a floodway may block the flow of water and increase flood heights. Because of this, your community will require that you submit engineering analyses before it approves permits for development in the floodway.

If your home is already in the floodway, you may want to consider what you will do if it is damaged. If it is substantially damaged (the costs to repair equal or exceed 50% of the market value of the building) your community will require that you bring it into compliance. In most cases, this means you will have to elevate it above the base flood elevation. Because placing fill dirt in the floodplain can make flooding worse, you'll probably have to elevate on columns, pilings or raised foundation walls. If your land is large enough to have a site outside of the floodway or even out of the floodplain, you may want to think about moving your home to a safer location.

What is the Definition of Alluvial Fan Flooding?

As defined in 44 CFR 59.1, the current (2000) definition of "Alluvial Fan Flooding" means flooding occurring on the surface of an alluvial fan or similar landform which originates at the apex and is characterized by high-velocity flows; active processes of erosion, sediment transport, and deposition; and, unpredictable flowpaths. The current definition under 44 CFR 59.1 will be revised to be consistent with the approach described in this appendix and specifically to eliminate reference to "similar landforms". The process described in this appendix is intended for flooding only on alluvial fans as described below. As interim guidance in the determination of "similar landform", unless the landform under investigation meets the three criteria under Stage 1 for composition, morphology, and location, the landform is not considered to be "similar."

As established by the Guidelines, the following definitions are used; Alluvial Fan — An alluvial fan is a sedimentary deposit located a topographic break such as the base of a mountain front, escarpment, or valley side, that is composed of streamflow and/or debris flow sediments and which has the shape of a fan, either fully or partially extended.

Alluvial Fan Flooding — Flooding occurring on the surface of an alluvial. Active alluvial fan flooding is a type of flood-hazard that occurs only on alluvial fans. It is characterized by flow path uncertainty so great that this uncertainty cannot be set aside in realistic assessments of flood risk or in the reliable mitigation of the hazard.

An active alluvial fan flooding hazard is indicated by three related criteria:(a) flow path uncertainty below the hydrographic apex, (b) abrupt deposition and ensuing erosion of sediment as a stream or debris flow loses its competence to carry material eroded from a steeper, upstream source area, and (c) an environment where the combination of sediment availability, slope, and topography creates an ultrahazardous condition for which elevation on fill will not reliably mitigate the risk. Inactive alluvial fan flooding is similar to traditional riverine flood-hazards, but occurs only on alluvial fans. It is characterized by flow paths with a higher degree of certainty in realistic assessments of flood risk or in the reliable mitigation of the hazard.

What are "as-built" Plans?

A community may require submission of "as-built" plans to certify that a project was built in accordance with the permit. A registered professional architect or engineer certifies the actual construction. 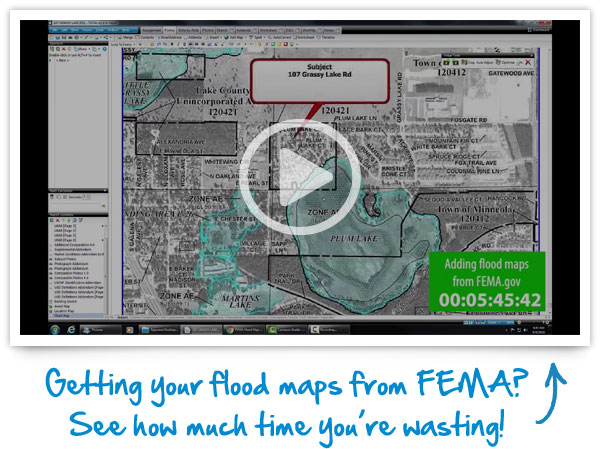 When you're working against a deadline, every minute counts. Seamlessly add our hi‑res, full‑color, automatically sized InterFlood maps straight to your report in only seconds.