This document details the complete list of updates and changes made to TOTAL released with the June 01, 2016 update.

In this update, we've given you more control over how you enter your data in ways that will also save you a lot of time.  First, and one of the biggest changes, is the addition of universal adjustment rounding.  You can now set default rounding for sale, rental, and listing comparable adjustment fields. Even if you think you're only spending a couple of minutes manually rounding adjustments on every report, those minutes add up to lost hours every month. This new feature gives you that time back. 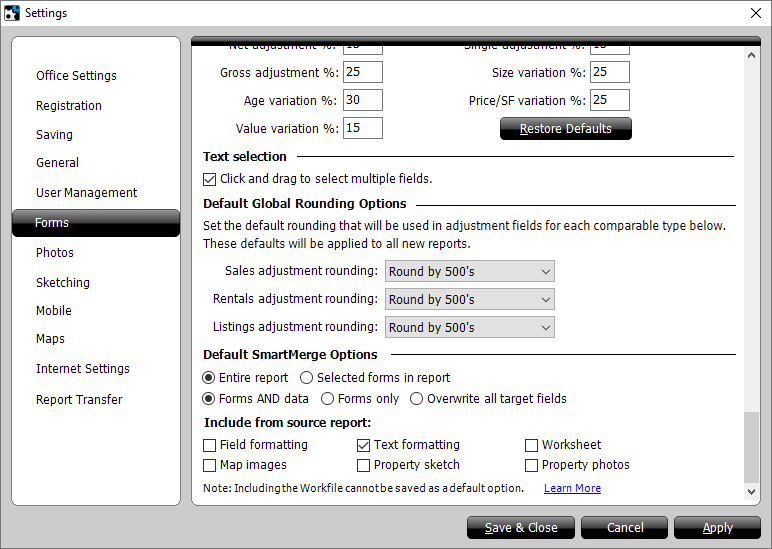 Second, you probably already know that keyboard shortcuts (hotkeys) can save you a ton of time when formfilling.  The F2 hotkey, which has been in Comps Side‑by‑Side for over a decade, is particularly helpful since it "pushes" grid data to multiple fields.  This update gives you more control over how far you push data with F2 (the page you're on or the whole form) and whether it pushes to comps without street addresses. F2 is also now available in the E&O PowerView.

Of course, we've also included a host of fixes.  Most notably:

For the complete list of improvements, take a look at the detailed release notes below.  And, as always, thanks again for giving us your thoughts via the Feedback feature inside TOTAL.  We read them every day and we can track them much better than standard e‑mails.

P.S.  In case you missed our previous update messages, click here for the release notes archive.