This document details the complete list of updates and changes made to TOTAL released with the February 20, 2014 update.

We've been extremely busy working on a host of stability and performance improvements. You'll see all of those in next week's update. In the meantime, we're delivering these new features to you — Timeline and Bird's Eye View maps in your comps grid.

Timeline is a feature you won't find with any other vendor. It was built around the concept that every time you do something major to a report (import mobile data, deliver, swap a form, etc.) a version should be saved automatically. You can then easily "roll back" to a previous version in a few clicks. Think of it like a time machine for your appraisals.

For example, say it's late in the evening and you accidentally merge in data from the wrong report. When you realize it in the morning, use Timeline to jump to the precise point before your mistake. There's no need to go through your entire report with a fine-tooth comb to delete data that was accidentally added.

Try it and let us know what you think. With the form open, simply click Timeline at the top. Then use the slider to preview every version of your report. Find the version you want to revert to and click Use this Report Version. 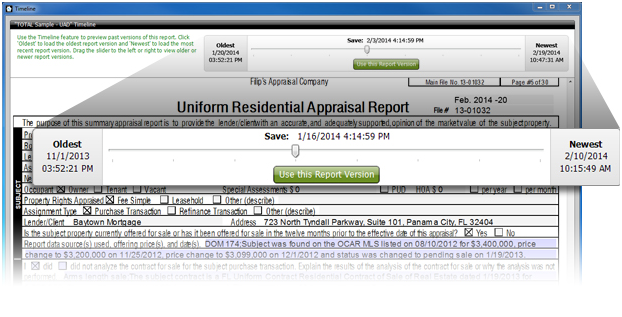 You'll also notice Bird's Eye View (BEV) maps in the Comps Side‑by‑Side PowerView. Simply click the globe icon for any comparable to see the map. Unlike the typical top-down aerial map, BEV images are taken at oblique, 45-degree angles. They show sides of buildings, not just rooftops. BEV maps are provided by Microsoft, and they forbid saving, downloading, printing or manipulating the images — so you won't be able to print them in reports. Still, they're perfect for a quick look at a property. 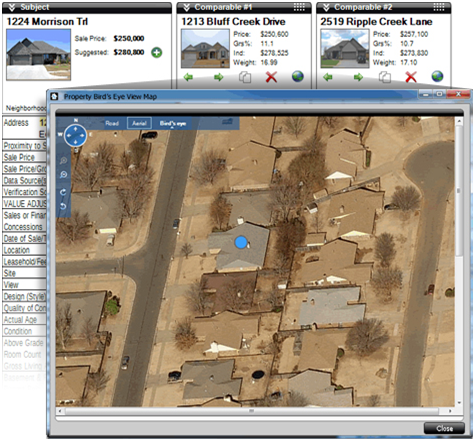 As always, thanks again for giving us your thoughts via the Feedback feature inside TOTAL. These new features came directly from your feedback. We read them every day and we can track them much better than standard e‑mails. Please keep them coming and we'll keep making TOTAL better.

That's all for now, but expect another update very soon.